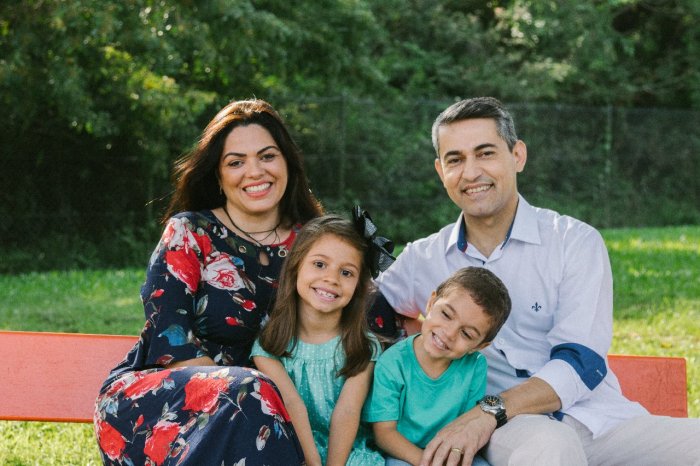 My family and I have been a part of Jesus’ church since 2014 when we became Christians. I work together with my wife as a commercial sales rep. I am also a realtor which is how I met Kevin and Benay. In 2017 I was asked by one of our pastors, Vanderlei, to show them houses for sale. I chose five houses for them to look at and we agreed to meet up at one of the houses.

After we looked at most of the houses, Kevin and Benay said that they all had very good characteristics but none were really what they were looking for. When we finally got to the last house we all agreed that it was exactly what they were looking for in terms of space, safety, location, the fact that it was on a calm street, in front of a park and the possibility for expansion and construction.

I then found out that the house would be used for a social purpose, and would be called Hope House. Kevin patiently explained to me the reason for the initiation of this project and explained the story of how God placed this project on their hearts. I found out that they had little to no money for this project, which to me, as a realtor, would normally seem kind of crazy. But this time it was different. I truly did believe that God would provide the necessary resources for the purchase of this house.

I was greatly impacted by the abundant love the Blumes had for the men in the rehabilitation centers here in Porto Alegre. I had worked at our church helping with the media and as a small group leader, but I had never fully understood the grandeur of a ministry that takes care of people that are truly in need like the men in the rehab centers.

I knew of Desafio Jovem, the rehab facility our church ministers to, because the men from there come to our church every Sunday to be a part of the service. They would always have lunch offered to them after the service by one of our small groups. I had personally made and served them lunch two or three times since I started going to church but I had never had this love of Christ for them that the Blumes have.

The invitation made by Kevin to work in this ministry was something I truly didn’t expect. I even said that I didn’t think I was ready for this mission which was when he told me that he wasn’t looking for perfect men but men who owned up to their mistakes, could give an example of reconciliation with God, and could be an example of how to treat your wife and children. I then realized that Kevin’s calling was God’s calling, which is to exemplify that it is not the able ones who are chosen but the chosen ones who are made able through Jesus Christ. The transformation of our lives is through Him.

I told him that I would pray about this decision to find out what God’s will was for me. Whether or not I should be a part this ministry which was totally different from the type of ministry I imagined for myself when I was converted.

A short time later, the church organized a retreat for church leaders. It was on the same date that I had chosen to invite the Blumes over to give them my answer. So, my wife and I decided to go to the retreat and during the retreat we let Kevin and Benay know that we would accept the invitation to begin this new mission. We had just begun a relationship with the Blumes that would completely change our lives forever.

As we all know, before big victories, the enemy prepares big obstacles and wars and this situation was no different. My wife and I had to ask for help with our marriage which seemed like it would collapse at any moment. I will never forget when Benay said that she clearly saw the enemy using my wife’s and my mouths and words against each other. She explained that she clearly saw the enemy laughing at how much territory he had gained. We analyzed the motives of our many conflicts and realized that they weren’t so big after all and we only needed to make minor adjustments that were being heavily overestimated.

We began meeting with Kevin and Benay.  We used, studied and discussed a book called “His Needs, Her Needs.” We used it as our guide. We would meet weekly in the mornings at the Blumes apartment to talk about our marriage, our relationship, our children, our house, etc. I must say that these American-style breakfasts were impressive both in the spiritual, intellectual, and cognitive sense, and in the delicious North American customs when we would have peanut butter or donuts, for example.

We began helping with the Ministério Compaixão (Compassion Ministry) where we were responsible for the interaction between the church’s small groups and the men in the rehabilitation center. We would monitor and take care of the lunches and all interactions always seeking communion and brotherhood between both groups.

We created strategies, modified the way we serve, modified where the men would sit during service. We began to talk to more people and found out that the love of Christ was spreading, working between us and we truly began to feel like we were a part of our church when we saw the significant improvement in the behavior and attitudes of our brothers in the rehabilitation center and our brothers in our small groups.

Each day that passes by in this ministry our love for these men grows. The more we dedicate ourselves to them, the more the Lord rewards and blesses us. Today we are part of a ministry in which we can extend love to the men in rehabilitation and are able to give more support so that this battle, which we fight every day with our flesh, is overcome and we can, all together, complete the good race and reach the end with our sense of duty fulfilled, always maintaining faith and hope in Christ.

I praise the Lord for the life and work of the Blumes, through which we can see the true love of Christ, where economic, racial, or intellectual differences don’t matter but the truth that we are all brothers is highly exalted.

The love that the Lord teaches us about is heavily shown through the Blumes and reaches out to all members of the church and is clearly shown through the countless testimonies of members of small groups talking about how they were so heavily impacted by the work the Blumes do at the rehabilitation centers. I am sure that the love of Christ is also moving the hearts of those who observe from afar the way we treat the men from the rehabilitation center and how we are treated by them.

I wish the Lord would send more couples like the Blumes to plant the love of Christ in all of the churches here in Brasil. I would love to thank those who allow this brilliant ministry to happen, who let themselves be used by the Lord to provide for the lives of these missionaries and the ministry they have created.

Glory be to God for all of your lives who have taught me how to love my neighbor, and especially to Kevin and Benay, who have dedicated their lives to the city of Porto Alegre, where me and my family have been transformed by their example of Godly love.

Published by Blumes in Brazil

View all posts by Blumes in Brazil